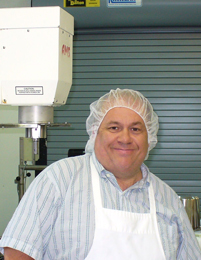 C’est Bon Cheese is a small micro-dairy located in St. Mary’s, Ontario run owned and operated by George Taylor. Taylor left behind in Toronto a fast paced television career over ten years ago to move out into the quiet countryside and milk goats. Although his current reality is different than the one he expected at the time of his retirement, Taylor has never looked back.

Taylor realized quickly that his small-scale milking operation would not be profitable, and so he turned to cheese making as a value-add to his premium quality goat milk. Taylor stepped into unfamiliar territory of cheese making with no experience, but in little time his passion, competence and confidence began to grow. Taylor is endlessly committed to producing only the highest quality fresh chevre and his success is widely known and celebrated throughout Ontario.

Taylor’s passion for chevre-making is impossible to ignore when speaking to him. He takes the utmost pride in the fact that no tub of chevre leaves his workshop without his fingerprint on it. Unsurprisingly, Taylor spends his free time sharing his love for cheese making with close friends in Havana, Cuba who manage an operation similar to his own. He continues to be inspired and motivated by his friends in Havana, who work under very difficult conditions yet never lose faith in their dream to produce delicious cheese.