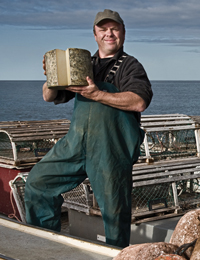 Some things are best left unchanged! That is the philosophy of Cow’s Creamery owner Scott Linkletter and his head cheese maker, Armand Bernard. While travelling through the Orkney Islands in Scotland over 30 years ago, Linkletter became enamoured with the local cheeses, so much so that he decided he wanted to recreate them in his hometown province. After much research and discovery Armand came up with an old Scottish cheese making recipe that seemed to fit the bill. And they sure got something right as their cheeses have become award winning cheeses throughout Canada and the United States.

The cheese at Cow’s is produced from local PEI herds of Holstein cows. The Avonlea cheddar is a clothbound cheddar which is aged for over 14 months. By wrapping the cheese in cloth during the aging period, the cheese is able to breath and moisture is able to evaporate. During the colonial period in PEI, this technique of wrapping cheese in cloth was a common one, so it is only fitting that this is how Avonlea is made today. In addition to some other cheddars and a newly introduced butter, Cow’s is also famous on the island for its ice cream. Tours of the facility are available year round, with samples provided of both cheddar and ice cream. Planning a trip to PEI just got a lot more enticing!