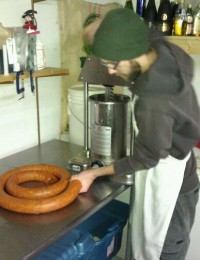 Seed to Sausage is a family-run operation that has emerged from the hobby of front man Mike McKenzie into a thriving cured meats business. McKenzie has been curing meat for over a decade and when he left the Armed Forces, he decided to turn his passion into his career. McKenzie now operates a sausage factory and store in Sharbot Lake, Ontario with his wife and his parents.

McKenzie strives to maintain a transparent production process and is always happy to explain how his sausages are made. Seed to Sausage uses only ethically raised animals and uses them from the tops of their heads to the tips of their tails. Nitrates are used sparingly, but another common additive to cured meats, Phosphates, are left out of all Seed to Sausage sausages. Phosphates allow for meat to retain water and increase in volume, but don’t add much to the final meaty product.

The McKenzie family is excited to be providing Ontario with locally produced salumi, filling both a void in the cured meats market and our stomachs!